The A14 is one of the most critical East to west roads in the UK, supporting costal ports of Harwich and Felixstowe with the midlands. At 410 miles the A1 is Britain’s longest road, connecting London to Edinburgh. The A14 meets the A1 at Brampton in Cambridgeshire and as part of the A14 project, it has widened it from two lanes to three in both directions between Alconbury and Buckden and built a redesigned junction at Brampton Hut to improve the access to both the A1 and A14.

The A14 Cambridge to Huntingdon project is now more than half way through construction. Nine of the project’s 34 bridges and structures have already opened to traffic and the longest one, the half-mile long River Great Ouse Viaduct, was completed in February 2019. The team has worked hard to protect and enhance the natural environment, and made incredible archaeological discoveries including a 100,000-year-old woolly mammoth tusk and woolly rhino skull, and more recently the earliest evidence of beer brewing in Britain, dating back to 400BC.

Seven miles of new lanes have been added after an improved section of it opened to traffic on Monday 25 March 2019.

The improvements the A14 scheme will help boost the local and national economy, upgrade a key link between the East coast and the Midlands and save up to 20 minutes for the 85,000 drivers who use it every day. And, with a decision due soon on designating part of the improved A14 and A1 as motorways, the project could create a continuous motorway from London to Peterborough for the first time.

The A1 is a vital road for England, just as the A14 is for the East, and this project will transform both in this area into three-lane, 70mph roads, making journeys safer and faster. The A1 is just one of six phases of the overall A14 upgrade project, and the 2700-strong team is working tirelessly to deliver the rest of this huge scheme, with work expected to be complete by the end of 2020.

Alongside the upgraded A1 there will also be a new local access road to help drivers making local journeys to get around. This will run from the new Ellington junction alongside the A1 northbound and is in addition to the new five-mile long local access road running parallel to the new A14 between Cambridge and Huntingdon. Together, they will strengthen local links between villages, improve access to Cambridge for local communities and will become part of the local road network when the new A14 opens.

Figures correct as per February 2019

Lynch is a trusted industry leading supply chain partner who always want to be better together. I have nothing but praise, thank you. 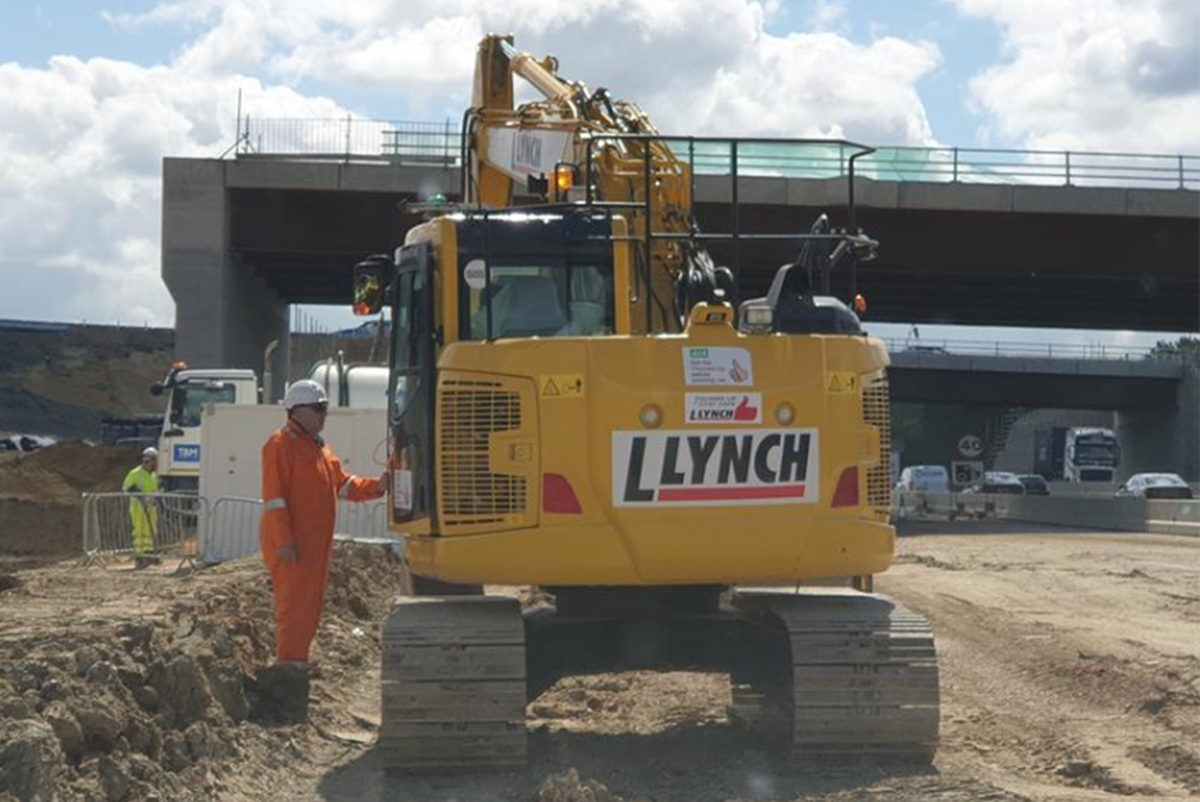 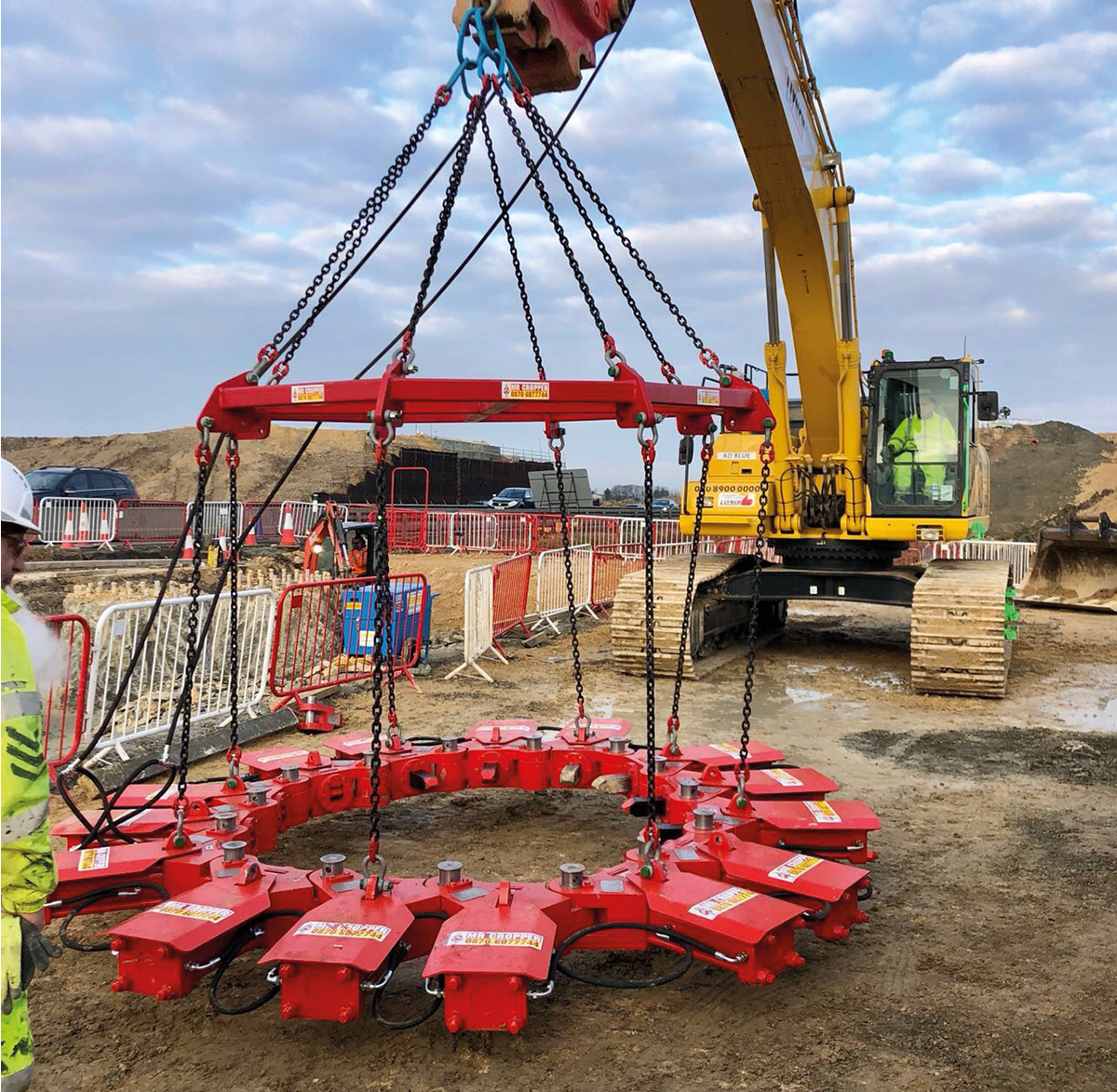 L Lynch Plant Hire & Haulage were appointed as a supplier of operated plant for the Integrated delivery team in early 2018 with scope of works to cover operated and self-drive plant, supply of 4x4 fuel bowsers, supply of tipper and grab lorries along with also winning the road cleansing framework to supply the project with multiple operated road sweepers. The first item of plant was a backhoe loader, delivered to site on the 22nd August 2016. The job quickly grew over the end of 2016 and by spring 2017 there was over 50 machines on the project.

With demands growing on-site, Lynch purchased £18,000,000 worth of plant between the summers of 2017 and 2018. Purchases included 10 x 30T dumptrucks, 20 x rubber ducks, 5 x tractors, 2 low-loaders and 10 road sweepers. In 2017 all 5 sections of works started from Alconbury at section 1 to Milton at section 5 some 30 miles away. In early 2018 Lynch helped the A14 IDT with an efficient way of moving pre-cast concrete sections from the pre cast yard on the northbound A1 to the new BN05 / Bridge number 5 which is the 900m super structure that crosses both the river Great Ouse and the East coast mainline railway line, in total Lynch moved 540 concrete slabs to site, each weighing 22.5 tons. By February 2019 over 160 items of plant with a further 45 lorries of various sizes were on site on a daily basis with the project working 24/7 on many sections.

The A14 IDT had a vision to be world class, and aligned to that a supply chain strategy that needed professional, dedicated, elite level supply chain partners who were open to different ways to work. "Lynch have worked in many new ways and better ways, bringing innovation to how we approach major projects, collaborated with others, lead a behavioural drive for improvement, committed to H&S with red zone training and everything delivered with a fantastic attitude to change our industry. Lynch is a trusted industry leading supply chain partner who always want to be better together. I have nothing but praise, thank you – World Class!".

Recognition for our teams:

Lynch have won the award for 'Respecting and caring for each other and ourselves' at the Annual Supply Chain Values Awards 2017.

Chris Gill was recently invited to the ‘Considerate Construction National Ultra Site of the Year Awards’ in London to represent the A14 integrated delivery team and its supply chain. The awards recognise the leading construction sites in the UK.

During the day the A14 IDT collected three winning awards for 'fairness, inclusion and respect' "Collaboration" and the main prize of the prestigious "Ultra site of the year" Chris comments "For the project and it’s numerous supply chain partners to receive such great recognition, at such a prestigious awards ceremony, is really a testimony to the legacy of the A14 IDT and the people who work on the project. The culture created by the A14 IDT for safety, collaboration and inclusion, align so well with our own company values, it’s been a fantastic project for all of our staff to be involved in".

A special note should also be made to Kier who’s M23 smart motorways project won the "workforce Wellbeing" prize, the project which is heavily supported by Lynch has embraced our "thumbs up" culture.

Lynch team win the Lean Award for the A14 innovation

On submission to the Lean Ideas Competition, the 'Lynch hire telematics', was awarded first place. It was judged by Mark Flicker, Lean Lead, A14 Integrated Delivery Team, to be "an excellent example of a proactive self-motivated move towards a more lean/efficient organisation which benefits all parties on the scheme".

Congratulations to Chris Kent for all his fantastic contributions and hard hitting presentations on 'Injury Free Environment' innovation. Chris received his award from Project Director, Julian Lamb for this engaging safety briefing and going beyond the call of duty.

Quarterly news, direct to your inbox

JOIN US ON SOCIAL MEDIA